In my previous post Using Go in React Native, I gave an overview of building iOS frameworks and Android archives using Go, and using them in a React Native application. During WWDC 2019 Mac Catalyst was announced allowing iOS apps to be built for and run on Mac. I found this quite exciting, but as the majority of my mobile application development was in React Native and, frameworks built with Go Mobile, and used Bluetooth, I needed to make sure each of these three elements would work when targeting Catalyst. An early discussion Support Project Catalyst (running iPad apps on macOS) in React Native Community provided some good resources and examples before starting. In this post I describe the steps needed to build a React Native app with Go Mobile and Bluetooth for Catalyst.

Starting with npx react-native init to create a new app, at the time in React Native 0.62.0, to build for Catalyst at minimum you must: 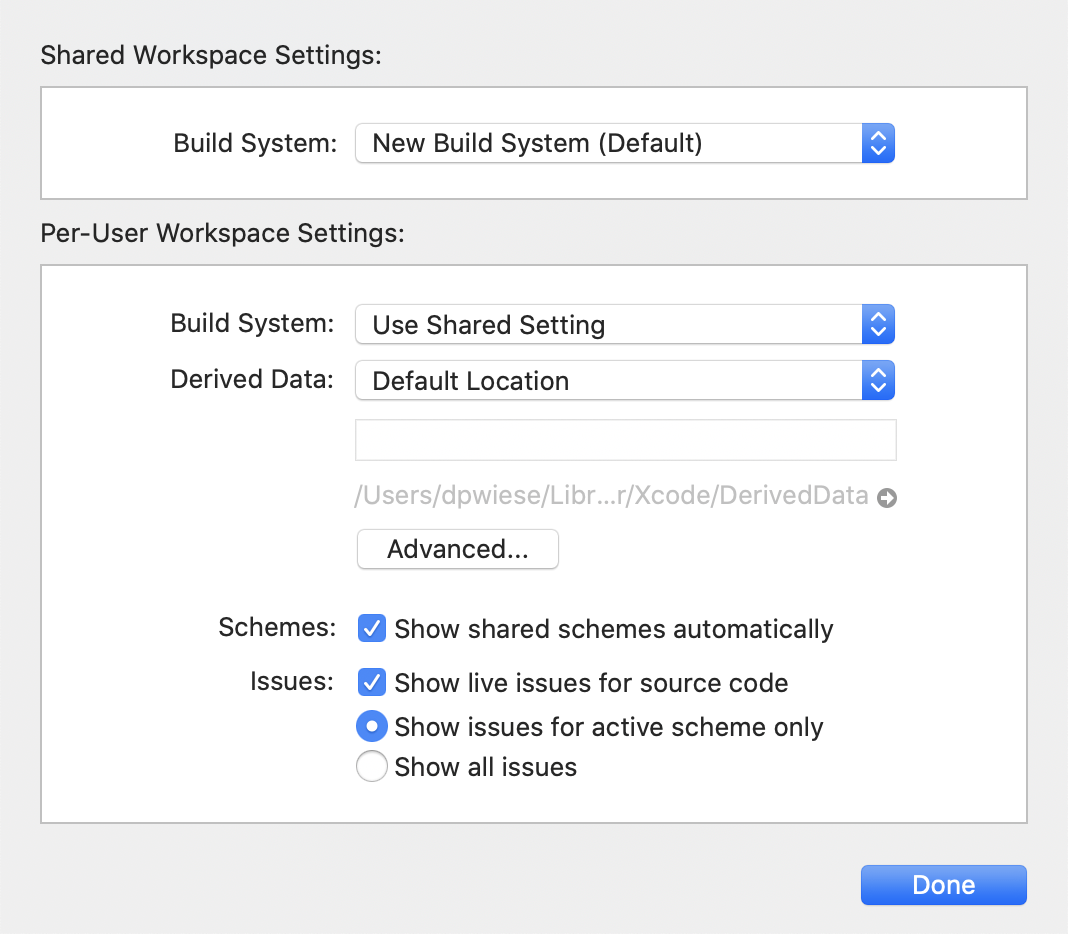 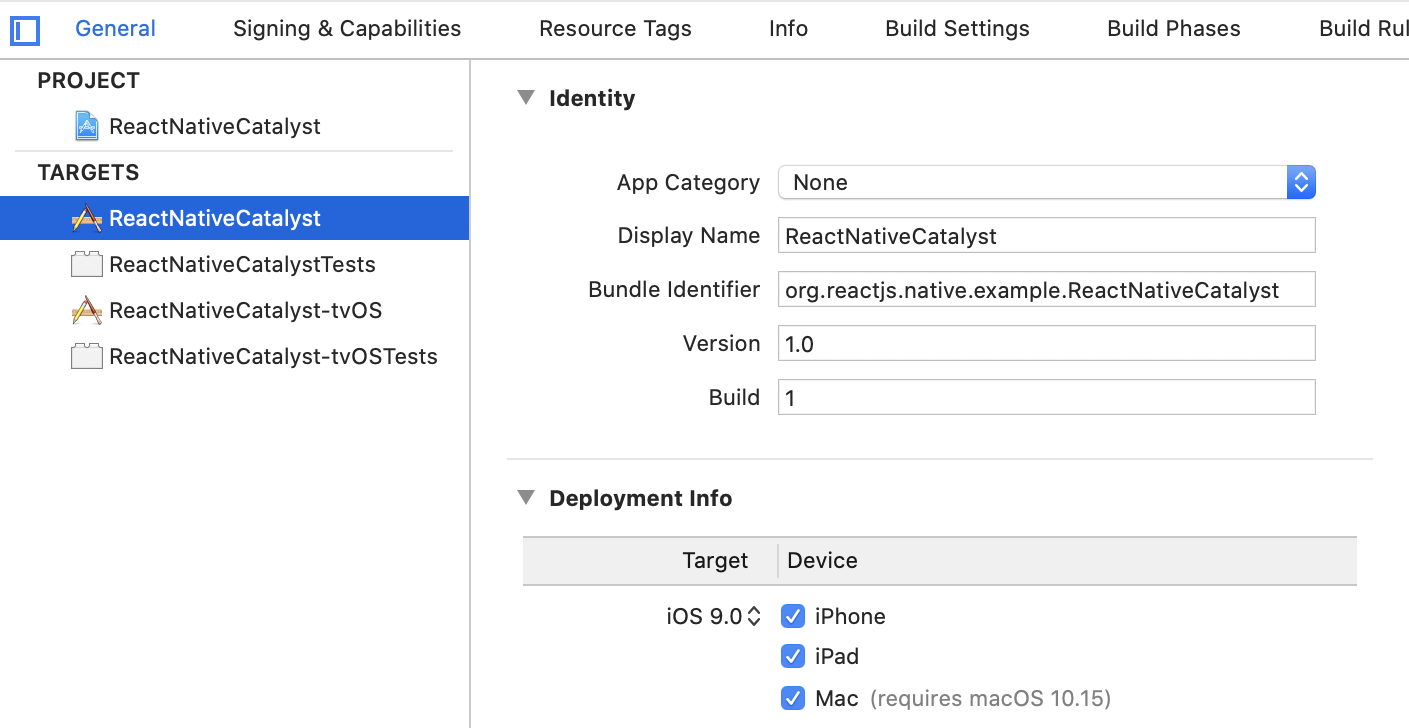 After performing only the two above steps an attempt to build for Catalyst gave the following error:

This issue is described in flipper/issues/834 and react-native/issues/27845, with the obvious solution to simply remove Flipper from the project, or patching folly/portability/Time.h as described here. Nevertheless, the inclusion of Flipper when targeting catalyst was not important to me, so I accepted these solutions and moved forward. I’ve yet to revisit this for a better solution.

Using Bluetooth in React Native has been made very easy with the react-native-ble-plx Bluetooth Low Energy library. I’ve used it for years and have had very positive and pleasant interactions with the team at Polidea who have built it. I expected Bluetooth support to transition well to Catalyst, as the Core Bluetooth framework around which react-native-ble-plx is built is available for both iOS and Catalyst. After installing, an attempt to target Catalyst produced the following error:

This error came from a few calls to the #available(iOS <ios_version>, *) during compilation that was used to, for example, set the maximum MTU size compatible with the particular iOS version. This availability condition is used to to determine the availability of APIs at runtime, and is very well described in the post Swift API Availability from NSHipster. The Apple Developer docs, Marking API Availability in Objective-C, also provide an overview, stating:

In Swift, you use the @available attribute to control whether a declaration is available to use when building an app for a particular target platform. Similarly, you use the availability condition #available to execute code conditionally based on required platform and version conditions.

I’m not sure why when targeting Catalyst this symbol was not defined as some posts such as this do seem to indicate it can be used for availability checks on Catalyst, so presumably it should compile. The post Forward-compatibility of @available? on the Swift forums was a bit unrelated, but an interesting read. Perhaps some compiler settings could be changed to solve the issue, but I wasn’t able to find any clues as to why it wouldn’t work in the first place. In the article Creating a Mac Version of Your iPad App it states:

If you have source code referencing APIs unavailable to the Mac version of your app, enclose the code in a compilation conditional block that uses the targetEnvironment(): platform condition.

without mentioning the potential use of the run time #available check when targeting Catalyst. In any case, it was simple enough to wrap the few occurences of offending #available as suggested:

The pull request with these couple of changes to enable react-native-ble-plx to work when targeting Catalyst is here.

Finally, with these changes, and after setting the entitlements by checking Bluetooth in App Sandbox under Signing & Capabilities, the React Native application was running on my Mac via Catalyst and communicating via BLE. 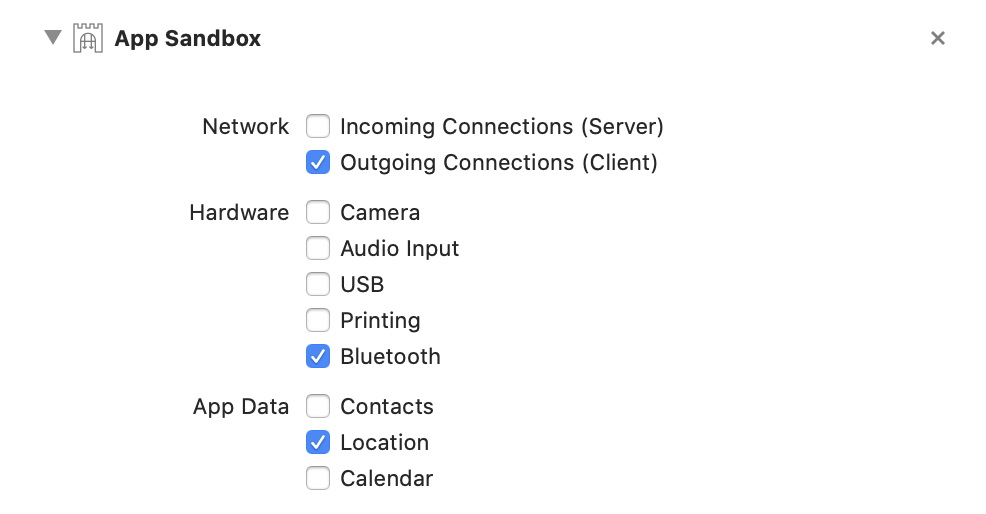 The next and final step was to include the frameworks I’d previously built using Go Mobile and ensure they worked with Catalyst.

Previously, when using Go Mobile with iOS apps, the output was a .framework which could be included in an Xcode project. The exported methods could be easily accessed in React Native via a bridge. Getting a Go package built with Go Mobile to build for Catalyst ended up being a bit more effort than I’d expected.

I first created a simple symlink between my default git directory and the default go directory. This allows the source code to be placed as desired, without a relative path specified when running gomboile bind.

Recall the following command which builds, in this case with the -taret=ios, a framework for use in Xcode, supporting each of the architectures defined in cmd/gomobile/env.go, and working on both iOS and the simulator.

As changes to gomobile were necessary to support Catalyst, after editing the source a new version of gomobile needed to be built by navigating to the gomobile source directory and running go build. This generates a new gomobile executable which can be placed in ~/go/bin from where it can be easily run.

Having previously generated a framework using the above command, a first attempt at building my previous sample application with React Native and Go Mobile react-native-gomobile-demo without modification gave the following error.

This was not unexpected. I quickly found the issue golang/go/issues/36856 which proposed setting the compiler flag with -target x86_64-apple-ios13.0-macabi to generate a Catalyst compatible framework. I was not very familiar with the format of this flag, so checking the LLVM source seemed like a good place to start to understand it a bit better. The VersionTuple class in llvm/ADT/Triple.h describes the format:

Just a few lines below gave me the answer I was looking for:

The triple format is also described in the LLVM docs Cross-compilation using Clang. In the case of the “triple” x86_64-apple-ios13.0-macabi, the architecture is x86_64, vendor is apple, operating system ios13.0, and environment macabi.

Now understanding where this flag had come from, I naively implemented a fix proposed in golang/go/issues/36856 in golang/mobile/pull/45 to add the flag an build a new framework. Nominally it worked, but this hasty fix simply overwrote the output for the x86_64 architecture which is needed for the iOS simulator for that needed for Catalyst. So with nothing more than these few lines I was able to get the framework working for Catalyst, but at the expense of giving up iOS simulator support, which was not acceptable. I then had to figure out how to provide support for the x86_64 architecture for both Catalyst and the iOS simulator.

Looking under the hood of Go Mobile, each of the different architectures specified in cmd/gomobile/env.go are used to build a corresponding static library which is ultimately combined with lipo and placed in the .framework output, as below:

I started looking into how to combine two static archives of the same architecture, each with different flags needed for the iOS simulator and catalyst. Two tools that seemed like they may be helpful to solve this problem were libtool and ar. I hadn’t used them before, nor do I have strong knowledge of compilers, or building and modifying archives and libraries. My first attempts resulted in terrors such as the one below when attempting to use the generated .framework:

In my short time working with these tools I think this approach should work - I don’t expect there is a fundamental limitation to including multiple static archives of the same architecture but built with different flags in a .framework. To solve this problem I probably just need to spend some time learning libtool/ar better, as it’s probably a case of user error to correctly combine the static archives. I do hope to revisit this at some point, but for now it turned out there was perhaps a more modern alternative to what I had been attempting to do with lipo.

The error from my initial attempt above suggested replacing the framework with an XCFramework that supports both platforms. This comment suggested the same. XCFrameworks were introduced WWDC2019 and in Xcode 11, and I also hadn’t previously used them. There didn’t seem to be as many resources on XCFrameworks as I’d expected, but the WWDC 2019 video Binary Frameworks in Swift, the Apple Developer article Distributing Binary Frameworks as Swift Packages, and the Xcode Help article Create an XCFramework were useful. I made a quick modification to Go Mobile to output individual .frameworks in a draft PR dpwiese/mobile/pull/1 enabling the use of xcodebuild -create-xcframework from these individual frameworks, instead of lipo -create from the individual static archives:

A first attempt at using this command gave:

This was solved by thinning the arm64 framework with lipo:

After thinning a second attempt with xcodebuild -create-xcframework gave another error:

I wasn’t able to find much information as to why these two frameworks of different architectures were being reported as equivalent, but a pull request in firebase-ios-sdk/pull/4737 gave some information. A comment said:

with some following discussion indicating that while tricky, 32 bit support should be possible:

The comment about this being woefully under-documented still seems to be true. As I was unable to find much more useful information about this issue, I reached out to steipete who very quickly and kindly replied, but did not provide any information or hints that the architectures armv7 and i386 were in fact supported in XCFramework. I decided for now that not being able to support these 32 bit architectures was acceptable, although I do hope to revisit this later on. For now I had nominally gotten a solution that would support iOS and iOS simulator as well as Catalyst for 64 bit architectures, which provides support for the last seven or so years worth of iOS devices. This extends the power of cross-platform development to include Catalyst, while supporting Bluetooth and Go powered frameworks to be used. The basic steps are outlined below.